So, the boys are back together. I worked so hard to get their paddock reverted to the way it was pre-surgery that my shoulders were so tense with pain afterwards. I’m not sure how many horse panels I moved, I almost had six fall, had to get the camera out of the barn, moved hay back out to all of the spots that I normally leave it, clean up the whole area, move the water buckets, and finally go get the horses off the pasture.

I thought it would be this major moment of excitement about being together again. Boy, was I disappointed. When I brought Harley up, he started eating on hay and stayed there. I brought Chaco up next, and he took a long sip of water and looked around. He and Harley touched noses as if to say, “Hey bro! Nice to see you got out of the pen.”

Chaco finally started walking around checking everything out. His nostrils flared, his head was up, and ears were perked forward. He moved with stealth all around the paddock exploring every nook and cranny. When he realized I demolished the pens, he picked up his pace to a trot, and he started doing canter-by’s around Harley threatening to nip him on the rear with each pass. Harley ate his hay.

Finally, Chaco had it and nipped Harley good on the rump. Harley’s head flew up, his ears pinned back, and he flew after Chaco. The games were on. They reared, they bucked, they ran, and they play nipped until I brought out their feed. Harley went back to eating. Chaco ran up to me on the muscle. He wanted to eat, but he also wanted to run. “I promise you get to play after this,” I reassured him. He let out a big sigh of relief and followed me into the barn. 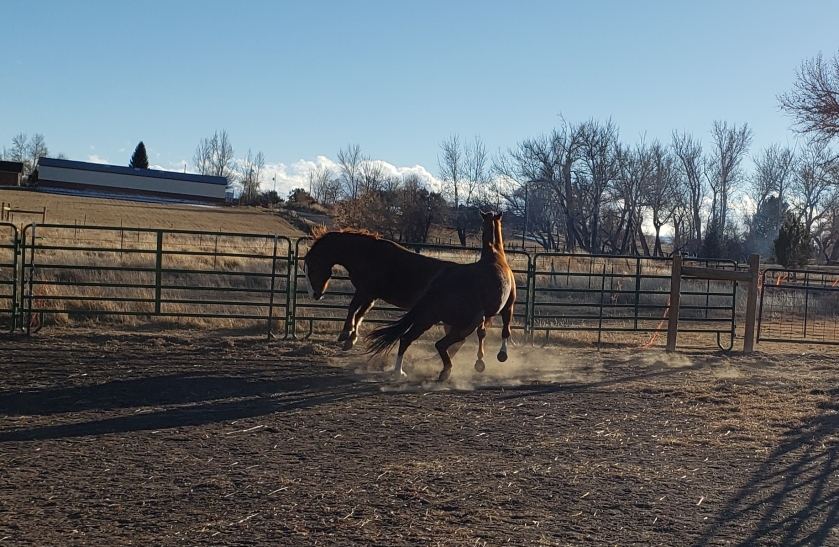 I went out twice during the middle of the night to check on them. The moon was bright, so I didn’t need a flash light. When my eyes adjusted to the moonlight, I saw them racing around the paddock. The instant they saw me, they stopped dead in their tracks as if I caught them with their hooves in the cookie jar. I walked out to them, and I checked Harley’s knee first. No heat and walking just fine. I then checked Chaco’s stifle. No heat, no swelling, and walking and running perfectly.  I hugged them both and headed back to the house. When they thought I was inside, their ruckus play began. I stepped back out, and they stopped immediately looking at me askance. I went back inside the door and watched. They were immersed in such joy at being fencless.

This morning they were relaxed and totally exhausted; calmness returned. Harley jumped at the silliest things during the past month and a half when they were on small turnout. Chaco was wound up with so much stored energy that rearing up became a daily event. Now they sauntered around the paddock and sniffed my pockets gently and nuzzled lovingly. I had my horses back.  Even though they could touch one another and stand side by side, that fence may as well have been electrified with nervousness. A fence between them changed their personalities dramatically, and the simple act of taking it down and letting them run and eat and sleep together brought them back home.

They took a two hour long nap this morning. They never do that. I envied them; their ability to shelve all of their daily plans for a sunbath upon the warming, deep earth. When they finished their morning slumber, I took their work off that proverbial shelf. I walked Chaco for 25 minutes for the first time today. He did so well, and he stepped over the few poles perfectly. I then walked Harley, and he and I jogged over several patterns, which he did perfectly.

Since Chaco had the chance to blow out his pipes on Tuesday and ran around all night last night, I decided he needed some bodywork. He relaxed deeply into it, and had nice releases through the poll, neck, shoulders, and withers. Nothing too remarkable but with each release he sunk deeper and deeper into acceptance of what his body needed to do. I decided to go for the lumbar/sacral points, which after the surgery became very loaded with tension willing to be released.

I didn’t record it like I should have, shame on me, but Chaco had a big release at his lumbar/sacrum junction, which I believe is tied to his injured stifle and wreck on the track. I worked on this area holding the point with air gap. Lots of blinks and lip twitches, and his head dropped low. When he started to fidget by backing up, instead of staying with him on these points, I took my hands off of him. I had a feeling he was about to go into a release, so I stood back. His head jerked, he yawned, licked his lips, and then he shook his head. After that he bobbed his head up and down in yes/no movement. Thus, he did range of motion of c1 and c2. He pawed the ground first his with left front hoof and then switched to his right front hoof. He lifted his left hind leg, then right hind leg, and then he dropped into Downward Dog, which was a huge stretch. He then stood for five minutes resting deeply. His eyes were closed, his lower lip hung down, and his breathing slowed down. I took a picture of his right hip area to document the white hairs, which indicates previous injuries. Instead of seeing the hairs, I got the following. It was 12:30 in the afternoon, so the sun was overhead. Think of it what you will, but I see it as a good sign, and believe some sort of healing is happening.

I’m so grateful for these two and whatever healing that may come.

I'm an artist, writer, and a lover of thoroughbreds. I was born and raised in horse racing, and now I wish to help rehome them, educate people about how fantastic they are, and show what they can do. View all posts by reenchantedhorses